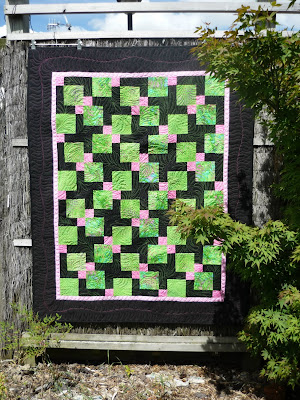 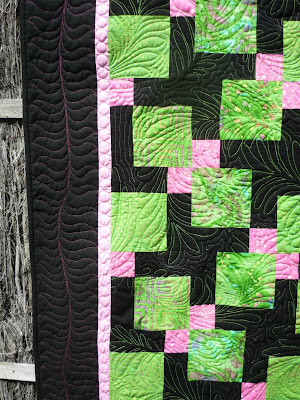 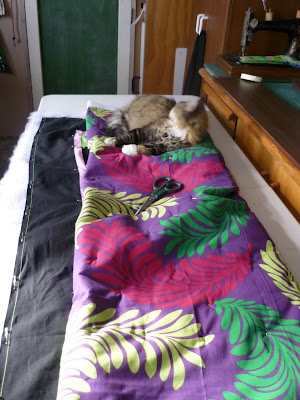 Lucy is testing my quilt just after the basting stage, take note of the backing fabric I have quilted around those feathers from the back in green thread. For the border I have used pink thread but quilted it from the front. Below is Oliver testing the quilt before the binding is done.
Tomorrow I hope to bind this quilt and take better photo's outside which will hopefully show up the quilting!!!!!! 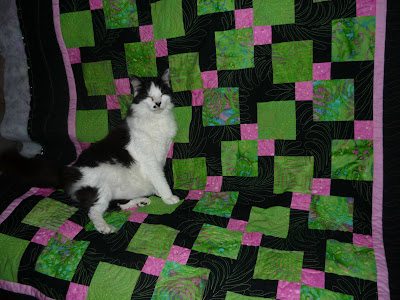 FMQ cushion. Made on a treadle sewing machine 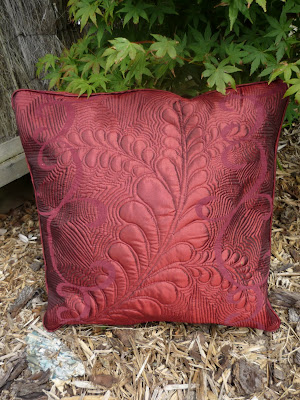 Today I made this cushion cover on my treadle sewing machine!!!! I tried to upload a short video clip of me FMQuilting on the treadle but it was taking forever so I gave up maybe I will try again another day.
Posted by tizart at 5:41 PM 6 comments: 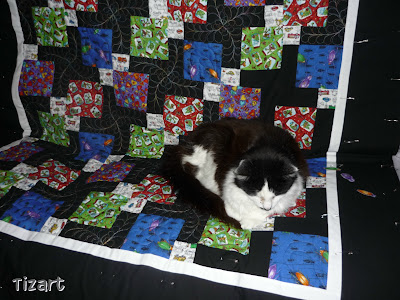 Today I started to quilt this disappearing nine patch quilt, I had planned on doing simple quilting then I decided I needed more practising FMQ feathers. So I have used variegated thread to do feathers in the black fabric. By about 9pm my shoulders were aching so thought I would leave the rest until tomorrow, laid it across the couch to admire it and guess who had to test it!!!!
His name is Oliver!!!!!!! 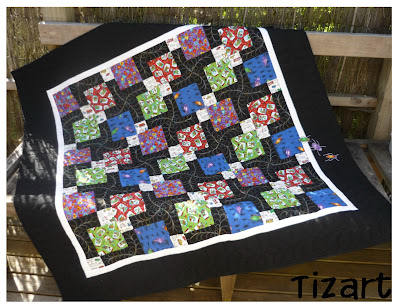 I have now finished the quilting, I have quilted feathers on the outer border in black thread. You will notice on the closeup photo some little bugs have escaped from the quilt WELL!!
I just love the saying " There is no such thing as a mistake! it is an artist opportunity"
while stitching on the border I found a small hole in the fabric OK so unpicking is something I just do not like to do! But really I think it adds interest to the quilt and a talking point. 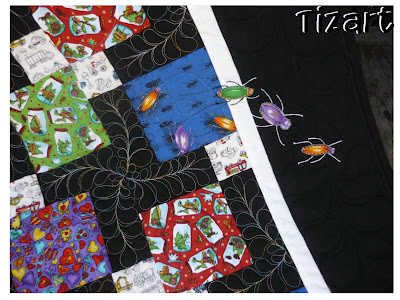 Feather stitched on a Treadle Machine 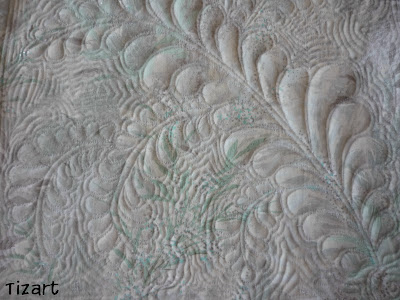 I just have to challenge myself a little more, this is so if we ever have a power cut I can still quilt if I want to!!!!!! I must admit it was a bit tiring FMQ on the treadle. Straight sewing is not so bad, I find straight sewing on the Treadle quite relaxing.
Posted by tizart at 5:28 PM 3 comments: 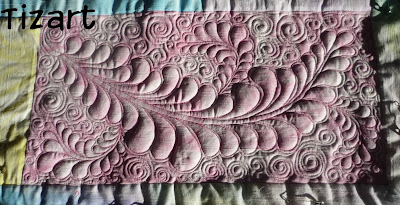 Here is my Free Motion Feather Quilting on my sample quilt!!!
Below are photo's of FMQ sample on a treadle sewing machine, I will be making them into a rag type quilt when finished all the samples at the end of the year.
Today I did not go for my usual walk BUT I made up for it by treadling feathers on the treadle sewing machine. I had stop every now and again as my legs got a bit tired.
Tomorrow I will fill in quilt around the feathers!!!!!!! 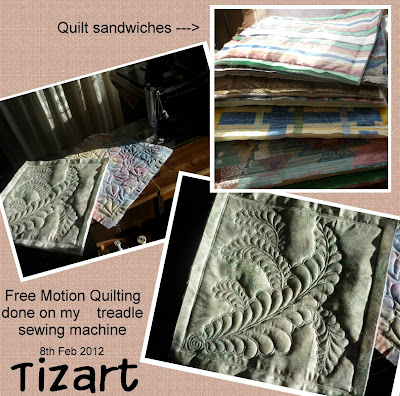 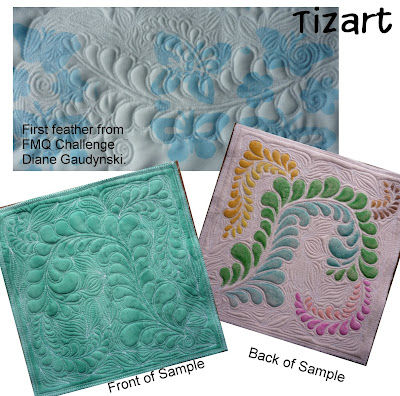 Here are my first samples for the FMQ Challenge run by SewCalGals. Feathers taught by Diane Gaudynski. I still have to do my sample on my SAMPLE quilt! I have also decided to do some of these samples using one of my treadle machines, I have already done the leaf on the treadle and will post photo's after I have done some more feathers. JUST LOVE FEATHER QUILTING!!!!!

tizart
New Zealand
I have been quilting for about 25 years and totally hooked. I love making quilts and other quilty things